We have launched a COVID-19 Tracker, The survey themes include health and risk behaviours, food security, income, work and job security, personal safety concerns, and access to government and community support. www.covid19tracker.africa

Joseph, a smallholder sugarcane farmer in Swaziland, stopped contributing to his funeral insurance cover – preferring to rely on his neighbours in the event a death in the family occurred. Questioned about this, it became clear that his decision boiled down to trust; “I just don’t trust the insurance business,” he said.

But what led to this mistrust in insurance? Joseph had witnessed an instance in which a funeral insurer failed to pay out the promised amount upon the death of its policyholder (a neighbour of Joseph’s). Despite the holder faithfully paying their premium for over 20 years, the insurance company only paid out a minimal amount in small instalments when he died. This led to Joseph’s conviction that “they [insurance companies] don’t deliver on their promises,” and this erosion of trust drove him out of the formal insurance system entirely.

The above example illustrates that trust is a powerful driver of human behaviour and a significant element of relationships. We trust our employer to pay us at the end of the month, so we go about our work as normal. We trust our friends to not gossip about personal, confidential matters, so we confide in them.

Trust is equally significant in the financial services industry. Financial service providers (FSPs) must first earn the trust of potential customers to ensure that they take up a product or service. But, it does not stop there – maintaining this trust and instilling confidence in customers is important for the sustained usage of products and services – and we identified in previous research that it is usage rather than take-up that is necessary for beneficial financial inclusion outcomes and impact of financial services.

Trust implies that there is an element of risk (as there is potential to lose something) as well as expectation (as we rely on the person, product or service to perform a particular action). This is relevant in financial services, as consumers entrust their money to FSPs with the expectation that it gives them back their money when requested; pays out an insurance claim when a risk happens; transfers money to another consumer or organisation when requested or gives them fair access to loans when an unforeseen expense occurs.

Although trust is a self-reported driver of (financial) behaviour, it is a complex construct. Many understand intuitively what trust is, but FSPs are possibly less sure of how trust is built or eroded.

Through a review of literature in fields ranging from psychology, sociology and through to economics and marketing, and by drawing on qualitative research conducted during past projects, we have identified two sources of trust and three main building blocks that either help to build or erode trust. 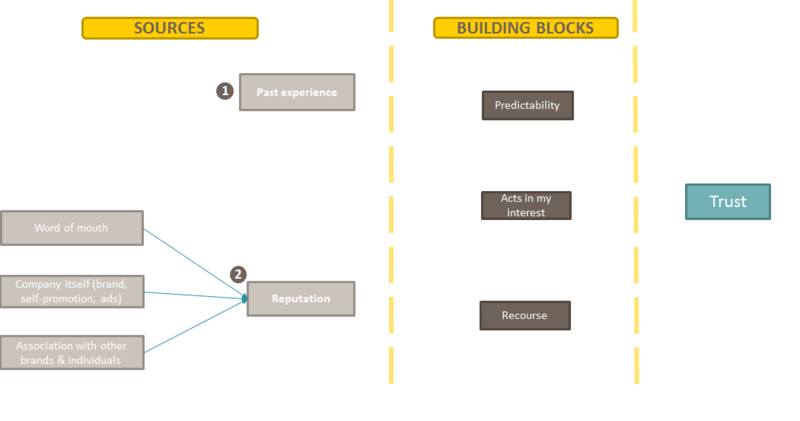 Past experience is one of the most valued sources of information when it comes to trust. However, just as positive past experiences with FSPs can build trust, negative ones can erode it. A bad experience at a bank will impact a consumer’s willingness to engage with this institution and use its products and services in the future.

Reputation has an influence on the way an organisation is perceived, which in turn affects trust. We have identified three main channels that affect the reputation of FSPs.

If the primary sources through which trust are built are past experience and reputation, what are the underlying factors that affect the extent to which consumers trust financial devices or providers? We have identified several building blocks of trust and classified them according to three categories:

We believe that when forming the intent to use a specific financial device, consumers look beyond the typical cost-benefit analysis of using the device, and also rely on rational, emotional considerations such as trust. We are conducting conceptual research to better understand the most significant drivers of usage of financial devices and how these interact and influence one another.

The conceptual research forms the backbone of the guide we are designing to help policymakers and FSPs identify which drivers are the most influential in determining usage within their given context. Our guide will identify which data types and collection methodologies are best suited to measure each driver identified in the conceptual model. For example, demand-side methodologies such as surveys, conjoint analysis, focus group discussions or human-centred design might be the best techniques to measure trust. We will continue to explore these techniques in more detail in our upcoming research.

We would love to hear from you if think we have overlooked a source or building block of trust, or if you have previously conducted research in this field. Please email kate@i2ifacility.org to contribute to our work on the drivers of usage.  See more resources on establishing trust in the financial sector.

This pocket guide highlights key findings from the market assessment of remittance flows into and out of South Africa using SARB data and a mystery shopping exercise looking at the costs of remitting via various channels, from South Africa.

FinMark Trust conducted a market assessment of remittance flows into and out of South Africa using SARB data and a mystery shopping exercise looking at the costs of remitting via various channels, from South Africa to other countries in the SADC.

A celebration of 20 years of learning - Webinar

To celebrate this milestone in our own development – and for the development of the financial inclusion landscape over the past 20 years, we will be hosting a series of webinars.

Hurdling towards the finish line – can women ever hope for an easier race?

The road to the Olympics for a young woman in the country is fraught with hurdles, though. To unpack why, consider the hurdles a young woman who is an aspiring Olympic athlete must overcome,

Botswana is moving towards the 2021 goal of reducing financial exclusion to 12% or increasing usage of more than one type of formal financial service to 57%.

The objectives of this study are to understand the SMME landscape in Botswana, Lesotho, Eswatini and Malawi, and provide recommendations for a financial inclusion and growth strategy.

Presentation on the impact of the RBA shift to AML/CTF

The study aimed to review the impact of the switch from the KYC approach to the risk-based approach on financial inclusion.

South Africa has implemented a shift from a rules-based approach to anti-money laundering and combating terrorist financing (AML/CTF) to a risk-based approach (RBA), a move that came into effect with the amendment to the Financial Intelligence Act.

The Great Reset – rethinking the data and measurement framework

The Great Reset has happened. The COVID-19 pandemic accelerated the inflection point with systemic effects that affect how people live their lives

This report reviews the implementation of the 2014 MAP Eswatini diagnostic, considers market changes, and identifies financial inclusion interventions to grow the economy

This report reviews the implementation of the 2016 MAP Zimbabwe diagnostic, considers market changes, and identifies financial inclusion interventions to grow the economy

This scoping study has been conducted to identify the barriers and opportunities to enable affordable digital delivery and access to basic services in Botswana.

This scoping study has been conducted to identify the barriers and opportunities to enable affordable digital delivery and access to basic services in Malawi.

This scoping study has been conducted to identify the barriers and opportunities to enable affordable digital delivery and access to basic services in Eswatini.

This scoping study has been conducted to identify the barriers and opportunities to enable affordable digital delivery and access to basic services in Madagascar.

This scoping study has been conducted to identify the barriers and opportunities to enable affordable digital delivery and access to basic services in Lesotho.

While we continue to focus on inclusive development of financial markets, we expanded our strategies to include a more direct focus on real economy impacts with FI 2.0

The FinScope Mozambique 2019 survey is the third FinScope survey implemented in Mozambique, following the baseline of 2009 and repeat of 2014.

The UK has announced a new package to reach 750 000 people in 8 countries across Southern Africa helping communities worst affected by the COVID-19 pandemic.

Read this 2019 full report for more information about the state of financial inclusion in Mozambique.

Exploring the relationship between platforms, participants and financial services.

The MAP country implementation is a key pillar of the SADC FI strategy, implemented with the SADC Secretariat and the SADC Committee for Central Bank Governors.

The forum was held under the theme “Strengthening Financial Inclusion in Zimbabwe, from Policy to Practice: Lessons and Way Forward”

An update on behavioural interventions which have proven to influence financial decisions.

MAP is a diagnostic and programmatic framework to support expanding access to financial services for individuals and micro and small- businesses.

While financial inclusion has risen to 68% globally, Sub Saharan Africa continues to lag with only 32% of its citizens having an account at a financial institution.

Behavioural interventions to better meet the financial needs of consumers

Digital platforms connecting buyers and sellers of goods and services across Africa are on the rise. Learn more about our research and week of learning in Lagos.

We recently rolled out a pilot study in Nigeria, to explore the digital financial services landscape and how it serves the people. Learn more about our findings here.

We take a closer look at financial inclusion research and the shift towards using transactional data to develop more meaningful indicators.

Read more about our work with the Nigerian Inter-bank Settlement System (NIBSS) and the key findings from our transactional data analysis.

We investigate the prospect of new financial inclusion indicators for policymakers, through transactional data analysis.

What opportunities does the digitisation of value chains create for the delivery of financial services?