We have launched a COVID-19 Tracker, The survey themes include health and risk behaviours, food security, income, work and job security, personal safety concerns, and access to government and community support. www.covid19tracker.africa

Hurdling towards the finish line – can women ever hope for an easier race?

Long-distance running is something that Kenyan women excel at in the Olympics. Collectively, they have taken the second-most medals in the world at 4 - second only to the fellow African nation, Ethiopia at 10 - and twice as many as larger and wealthier countries, such as the United States. The road to the Olympics for a young woman in the country is fraught with hurdles, though. To unpack why, consider the hurdles a young woman who is an aspiring Olympic athlete must overcome, no matter where on the continent they are born.

Joining an athletics team - and finding the money to support your competition is not easy. One way to secure this type of money, though, is through selling one's labour - or simply put, earning a wage - which is the first hurdle many young people in any of these countries must overcome. However, for young men, the race may well end here, and they simply have to determine how they spend their money. For young women, some additional hurdles remain.

Before starting to think about where they may want to spend their hard-earned income - women need to think of the household first. Their role as caregivers and tending to household items start at a young age - and qualitative research in both Kenya and South Africa substantiates this. In both countries, the burden placed on women to care for others first is higher than on men and their households have on average an additional mouth to feed compared to men. 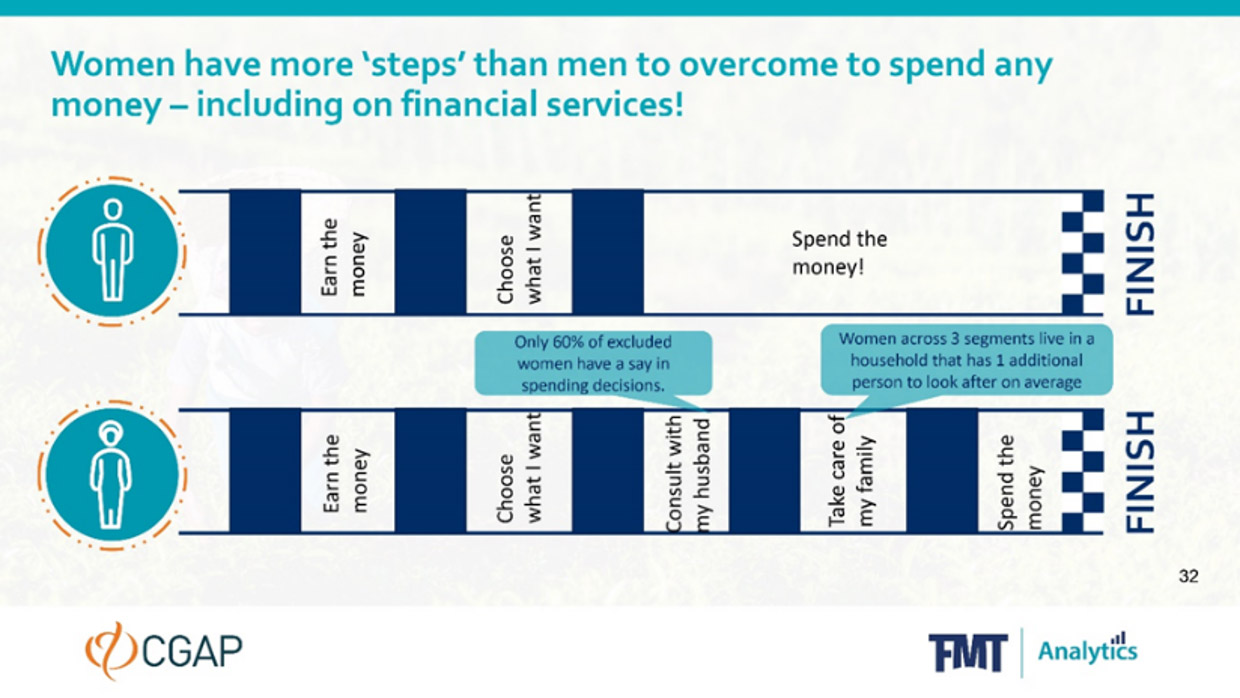 After household expenses are taken care of, they must then convince their family members - parents, spouses and others before making a large commitment such as paying for a sporting club membership. In Kenya, only 60% of women have a say in large financial decisions in their household. In South Africa, this is (62)%. Men have near universal participation in household decisionmaking.

Not only are there additional socioeconomic hurdles for women to jump over before they can make financial decisions. The financial products they use - such as informal savings groups - are often viewed with suspicion by both FSPs and regulators alike. This is because there is potential for abuse - and because these funds are not intermediated or used in the formal economy, which is more efficient.

This is why even after income, education, and a host of other variables (*) are controlled for, a study commissioned by CGAP and implemented by FinMark Trust, found that women continue to prefer informal products. In other words - there is a preference for informality amongst women above that of men that does not relate to income, level of education, or other items. 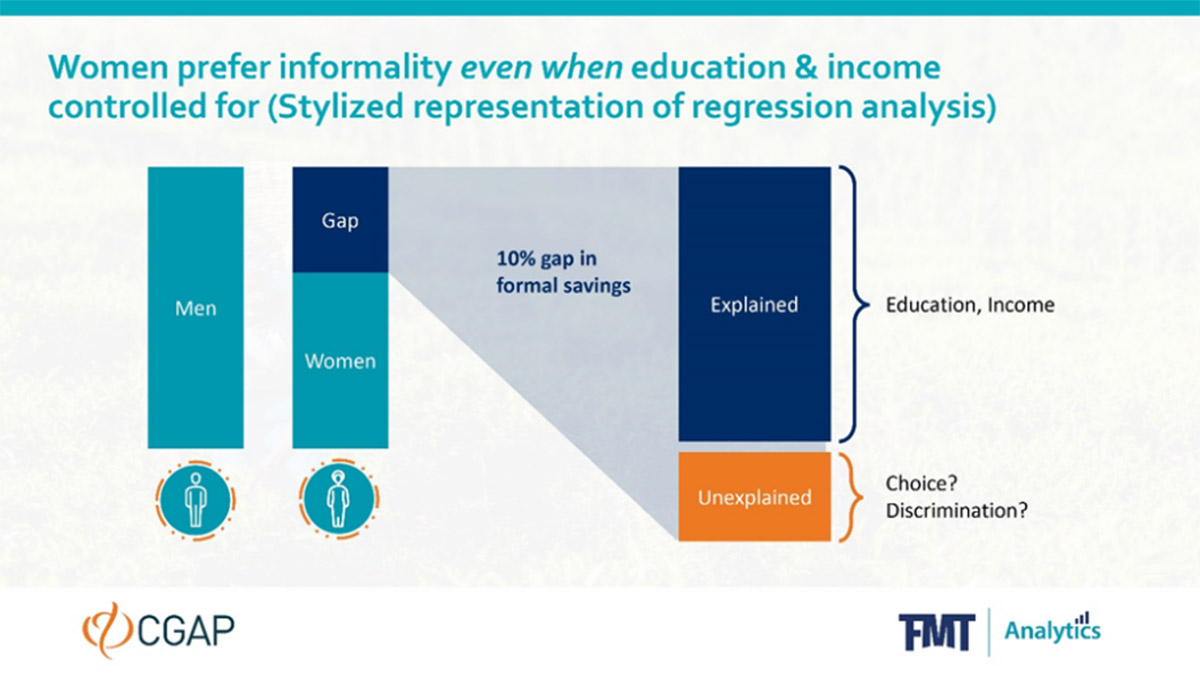 The implications are important for a variety of financial services stakeholders. A tolerance of informality may be needed for policymakers and regulators, even though it goes against their best instincts. FSPs need to imagine how they digitize an entire community structure - not simply offering a product that many people can deposit into at once - which are commonplace across the continent.

For donors and NGOs, it focuses on addressing other hurdles women face at home first before looking to formal financial services to solve these and design their support and interventions accordingly.

Otherwise the current situation is likely to remain for women. To understand why - consider facing the long race ahead to a much desired financial purchase - such as a new pair of running shoes - only for it to be obscured by additional hurdles others do not face. The place you turn to is your local community, which has always been there for you for support and encouragement. You eagerly await your turn to get a payout from your local savings group - who had let you contribute flexibly in the past when you had to make household ends meet. Billboards are promoting the wonders of saving at the large local banks in the marketplace where you all meet - but you don't see them anymore. They are there for someone else and their dreams.

When more is more: why financial inclusion demand-side surveys are essential for access to financial services

FinScope consumer surveys offer insights into people's financial needs, preferences, and behaviour. It does not attempt to replicate the work of censuses or other annual surveys.

The Great Reset – rethinking the data and measurement framework

The Great Reset has happened. The COVID-19 pandemic accelerated the inflection point with systemic effects that affect how people live their lives

This report reviews the implementation of the 2014 MAP Eswatini diagnostic, considers market changes, and identifies financial inclusion interventions to grow the economy

This report reviews the implementation of the 2016 MAP Zimbabwe diagnostic, considers market changes, and identifies financial inclusion interventions to grow the economy

The FinScope Mozambique 2019 survey is the third FinScope survey implemented in Mozambique, following the baseline of 2009 and repeat of 2014.

This dashboard represents some of the key market data on financial inclusion with a focus on females.

Read this 2019 full report for more information about the state of financial inclusion in Mozambique.

MAP is a diagnostic and programmatic framework to support expanding access to financial services for individuals and micro and small- businesses.

FinScope data analysis has revealed many insights on gender.

This pocket guide represents some of the key market data on financial inclusion.

This MAP Refresh Myanmar document follows on from the original MAP (Making Access Possible) exercise in Myanmar in 2013/2014.

This MAP Study Synthesis Note serves to summarize a series of documents produced as part of the Making Access Possible (MAP) Myanmar initiative.

The financial inclusion indicators are constructed from 14 SADC countries using findings of the FinScope Consumer surveys.

The Face of Social Exclusion Infographic

Despite progress around the world, many people continue to face social exclusion (i.e., limited access to social and economic opportunities).

As the income levels rise, more and more males have higher proportions in rising income categories than females.

FinMark Trust launched the results of the Financial inclusion survey of Rwanda on 3 March 2016.

Financial Inclusion in SADC through the FinScope Lenses” provides an in-depth analysis of the current state of financial inclusion in the twelve SADC states.

The 2012 FinScope survey was commissioned by Access to Finance Rwanda (AFR) and not FinMark Trust.

The Ministry of Finance established the Micro-Finance Unit in September 2010 to facilitate the development and sustainability of the microfinance sector in the country.

FinScope Mozambique 2009 is the first national survey of its kind, in which a representational cross-section of all adult Mozambicans have been interviewed comprehensively

The studies cover the demand, usage and access to all types of financial institutions from commercial banks

See the Access to Finance study presentation in Pakistan.

FinScope Rwanda 2008 makes a number of recommendations on the basis of the survey results.

FinScope Malawi 2008 was commissioned by the Ministry of Finance and the FinMark Trust, with funding from the UKAID

Financial Service Access and Usage in Southern and East Africa

FinScope surveys have been developed to track patterns of usage of, access to and attitudes towards financial services in a country.

The main presentation covers all of the top-line findings for Zimbabwe 2022. With 115 slides of insightful information, we evaluate trends, changes, and interventions over time starting from 2014.

The financial sector conducted the FinScope Zimbabwe 2022 Consumer Survey for the third time in a row. This repeat survey provides credible benchmarks for the extent and quality of financial inclusion.

Twenty years on: The ongoing impact of FinMark Trust

Past and present leaders of FinMark Trust discuss our beginnings, our impact and our plans to continue encouraging financial markets to work for the poor.

This pocket guide highlights key findings from the market assessment of remittance flows into and out of South Africa using SARB data and a mystery shopping exercise looking at the costs of remitting via various channels, from South Africa.

FinMark Trust conducted a market assessment of remittance flows into and out of South Africa using SARB data and a mystery shopping exercise looking at the costs of remitting via various channels, from South Africa to other countries in the SADC.

A celebration of 20 years of learning - Webinar

To celebrate this milestone in our own development – and for the development of the financial inclusion landscape over the past 20 years, we will be hosting a series of webinars.

The brochure summarises and highlights the FinScope Consumer Survey Lesotho 2021 report's findings. It serves as a quick reference guide to the key statistics and insights.